Research has shown that ADHD does not affect the intelligence of children and the range of IQ is the same... END_OF_DOCUMENT_TOKEN_TO_BE_REPLACED

It’s no secret that colleges and universities across the country expect a lot of the students admitted into their student... END_OF_DOCUMENT_TOKEN_TO_BE_REPLACED

More and more children are being diagnosed with autism every year. Is autism somehow becoming the next fad diagnosis? What... END_OF_DOCUMENT_TOKEN_TO_BE_REPLACED

What are Sexting and Sexcasting? 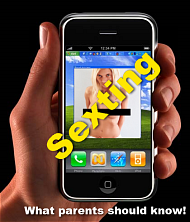 How common is receiving a sext among teens?

How common is making and sending a sext among teens?

Why do teens send such pictures and messages?

How can they fail to see the potential harm?

So, practically speaking, what might motivate a teen to make/send a sext?

Although sometimes done to attract another, it’s usually done on impulse, not necessarily sexually driven. Often done on a lark at slumber parties, locker rooms.

Once in cyberspace, photos can be spread like wildfire through a school or a community.

What kind of kid does this kind of thing?

What are possible long-term consequences?

What signs should a parent look for?