It’s no secret that colleges and universities across the country expect a lot of the students admitted into their student bodies. For some students, who may not know how to effectively deal with the pressure and stress are increasingly turning to medicinal stimulants, prescribed specifically for ADHD patients.  In fact, according to recent studies, as many as 1 in 6 students in higher education institutions use these stimulants to improve their academic performance and concentration.

Even though 1 in 6 might not seem like a huge percentage of students, it equals about 17% of the student population in America. These students are not only misusing prescription medications, they are also violating laws and could very well find themselves in the custody of the law.

The most commonly misused ADHD medications include Adderall and Ritalin. The research states that these are both “Schedule II controlled substances, placing them in the same legal bracket as substances such as cocaine and methamphetamine.” It may be true that many students don’t really know what they are getting into, but many are misusing these medications to control their brain’s ability to be stimulated.

Kari Benson from the University of South Carolina (USC), the author of the study, conducted research during her sophomore year at USC in attempts to discover a correlation for “social impairment in children with attention deficit hyperactivity disorder”.”  She says that during her initial research students would ask her if she could help them get Ritalin or Adderall, which is how she discovered the widespread issue.

“If you looked at individual studies, the rates of college student misuse were all over t        the place,” says study author Prof. Kate Flory. “They ranged from 2% to 43%.” As a result, the authors conducted a meta-analysis of data from 30 papers…The researchers found that 17% of college students misuse stimulant medications for ADHD, either taking medication without a prescription or taking a larger amount than prescribed.” 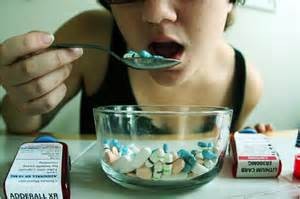 Ironically, there have been absolutely no positive correlations proven between taking a stimulant ADHD drug and an improved ability to learn.  Ironically, many of the studies conducted suggest the opposite. These mind altering drugs actually have been shown to have the opposite effects and may actually impair your abilities to learn and focus effectively.

While using these medications without prescriptions, or overusing them can be dangerous enough, some students have been found using them to help increase their alcohol consumption without feeling the effects. This is extremely dangerous.  ADHD Medications “make it possible to drink beyond the normal limit,” says Benson. “So instead of passing out drunk, you might end up in the hospital having to get your stomach pumped.”

Don’t take our word for it though. “Last year, Medical News Today reported on a study suggesting that college-aged students who occasionally used stimulant drugs have impaired brain activity linked to anticipation”

Medication Sources and Segments of Misuse

Many students get it from friends who have ADHD  or friends and family members who can get access to these medications through jobs, or other connections.  From a study of only 30 students, it was also discovered that certain segments may abuse these types of stimulants more than others, including:

Researchers at USC plan on doing additional research to see if they can find specific markers that identify users or potential users of drug abuse or misuse in order to create an intervention program with the help of a grant from the National Institute on Drug Abuse.