Are you one of the millions of people who battle with anxiety on a daily basis? Do you become frustrated... END_OF_DOCUMENT_TOKEN_TO_BE_REPLACED

The brain is the most complex organ in the body, and even with all of the recent advancements in medical... END_OF_DOCUMENT_TOKEN_TO_BE_REPLACED

ADHD    |    QEEG (Brain Mapping)
When you learn that your child is having a problem in school, you are confronted with a confusing but limited set of options. Special Education classes, tutors and medication are available. But often the problems persist, or only marginally improve. Of course, there can be side effects to medication, along with the social stigma of waiting in line to see the school nurse. And many children become embarrassed attending classes separate from their friends.

Neurofeedback Therapy is a powerful method for training poorly regulated brainwave activity. While looking at game-like displays on a computer monitor, your child learns to control the activity of the brain for effective learning. For them, it is like playing a video game with their mind. For you, it can mean a dramatic improvement in your child’s academic performance and behavior.

Neurofeedback: What is it and How Does it Work to Help Neurological Defects?

Neurofeedback is one of the newest methods of managing neurological disorders such as anxiety, depression, PTSD, sleep problems and movement disorders. More recently, the treatment has been proven to help treat attention deficit disorder (ADD) and attention deficit hyperactive disorder. It does this by helping a person shift the way they pay attention, think and respond to situations. After more than 25 years, scientists, psychologists and patients everywhere are able to rejoice in the face that there is finally a solution that comes with zero negative consequences.

How Does Neurofeedback Work? 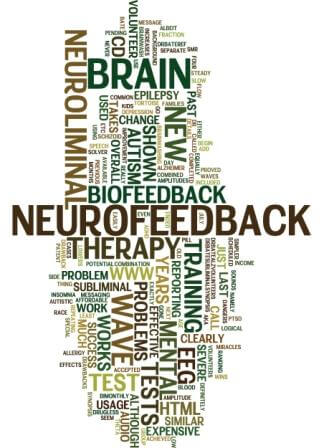 The human brain is made up of millions of tiny neurons that work as tiny little “batteries.” When a particular area of the brain is activated, the tiny neurons in that region become charged and create connections, otherwise known as brainwaves. Scientists can observe and measure those brainwaves via electrodes that attach to a person’s head and are connected on the other end to a computer monitor. This setup is called an electroencephalogram (EEG). Scientists and neurologists trace the brainwaves in order to spot harmonious interactions and, more importantly, irregularities. It is the irregularities that lead to neurological dysfunctions, which is why psychologists are so interested in where the irregularities occur and when. By identifying the where and when, analysts can determine the how of treating the symptoms.

In neurofeedback training, scientists study the EEGs to learn more about what the brain is doing—concentrating or drifting off. If the scientist catches the brain drifting off, he or she can ask the subject (patient) to perform certain activities aimed at increasing their concentration. By doing this, patients can learn what and what not to do to improve their focus.

Additionally, in training sessions, the doctor allows the subject to view the screen to see how their activities affect their brainwaves in the hopes of teaching the subject to produce brainwaves that are associated with being attentive and still. The ultimate goal is for the subject to be able to focus on their own, without the help of a computer monitor.

Though the exact mechanisms by which brainwaves become enhanced have not yet been established, it is generally known that exercising existing nerve pathways can facilitate their growth and development. Neurofeedback for ADD and ADHD is just a way to facilitate ongoing exercises of the pathways related to attention and impulse control.

When your child undergoes neurofeedback training, they will have sensors placed on his or her head, which will be connected to a recording instrument which detects the varying frequencies and amplitudes in the electricity of the brain being monitored. Changes in brainwaves show whether a person is paying attention, sitting still or even if they are suppressing the urge to move.

In a normal EEG, brainwaves are recorded with simple wavy lines. In an EEG done for ADD/ADHD purposes, however, the computer converts the brain’s electricity into colorful images and game-like displays, which are then paired with auditory feedback. The game-like displays may feature puzzle pieces that need to be fit together or Pac men trying to make it through a maze. Only by paying attention can a child play the game and ultimately conquer it. If the child’s attention starts to wander, the game will pause or the colorful images will disappear. He will only be able to regain the imagery when he begins to pay attention once more.

Many games and programs reward the child for each minute they’re able to sustain their focus by giving them points or increasing the speed at which images change. Each program can be adjusted up or down depending on the child’s grade level and ability so that are successful no matter what. The goal is to help the child increase their ability to focus, and not to make them feel bad about their condition.

Like with weight training, a subject must exercise his or her brain in order to see results. Over time, a child will be able to conquer these training exercises and achieve lasting beneficial changes to the brain, which will help him in school and in life.

Why You Should Give Neurofeedback a Try

Though neurofeedback training has not been formally recognized as a standalone treatment for ADHD, here at The Reynolds Clinic, we have experienced a remarkable success rate with the treatment. More often than not, parents turn to us only after their children have undergone multiple treatments but to no avail and, more often than not, they see the improvement they’ve been hoping for. While the effectiveness of the treatment depends on a number of factors—including your child’s age, their level of hyperactivity and whether or not they’re on any medications—we can say that 85 to 90 percent of our patients have walked away successful. Best of all, the treatment is completely un-invasive and does not require the use of any medications, a win for parents and children alike.

If you’re ready to help your child improve their overall quality of life, reach out to the team at The Reynolds Clinic today. Read more about the neurofeedback therapist – Dr. Reynolds here.

Neurofeedback is a cutting edge technology that utilizes computers to train children, adolescents and adults how to regulate their brain wave activity. As they learn to do this, many challenging behaviors come under control.

What is Neurofeedback used for?

The purpose of Neurofeedback is to improve self-regulation. It can be especially helpful when the individual has trouble focusing, completing schoolwork or office work or struggles to keep themselves organized and on track. Neurofeedback is also often used to help children and adolescents with social skills deficits, autism spectrum challenges (including Asperger’s Syndrome) anxiety and depression. Finally, individuals who have suffered traumatic brain injury or other neurological injury have been successfully treated using Neurofeedback.

How does Neurofeedback work?

Neurofeedback teaches the brain to become more efficient. Once learned, it doesn’t get unlearned. It’s a little like learning to ride a bicycle; once you’ve learned how, you never have to re-learn it. On rare occasions after the training, if an individual suffers a concussion they may have to come in for a few sessions of “tune up”.

What is the success rate for Neurofeedback?

At our clinic, Neurofeedback is successful 85-90% of the time, which is quite remarkable given that many of our patients end up here after several failed attempts to get help. We’ve even considered changing our name to “The Clinic of Last Resort”, so the fact that we can have such success with challenging patients is a testimony to the power of this intervention when done correctly.

To what do you attribute such success?

To begin we use an individual brain map, called a qEEG . Using the qEEG we “map out” the electrical activity a patient’s brain produces and compare that electrical activity to a data base of same age peers’. We are then able to determine exactly where to train the patient’s brain during the Neurofeedback making our treatment plan specifically tailored to the needs of each individual client.

In addition to the Neurofeedback therapy, we have the expertise to intervene on multiple levels—the patient, the home and the school/work environment, using a holistic approach to achieving success for each individual and their personal goals.

Does Neurofeedback work for everyone?

No, not everyone. Although rare, there are some children, who can be so oppositional that they will refuse to do something just because their parents want them to. However, even when a child balks, they usually want the help but are afraid to admit it. But when they learn that they will not have to talk about their problems and that all they have to do is to play video games with their brains, it is often enough to overcome their initial resistance.

There are also some children who can be so hyperactive that they can’t sit still even for a few seconds. In such cases we may actually recommend a medication consultation in order to engage that child and as improvement occurs, work with the physician to reduce the dose.

Finally, we do not work with children under the age of 6. We have found that by waiting a year or so, we get better results.

Will Neurofeedback eliminate the need for medication?

Medication should only be adjusted under the supervision of a physician. We have found most physicians willing to work with us to reduce and often eliminate the medications as the patient demonstrates improvement.

What happens if Neurofeedback patients are already taking medications?

Neurofeedback often improves self-regulation to the point where medications may be lessened or no longer be necessary. However, it is essential that medication reduction/elimination be done only under medical supervision. We are always happy to assist the physician in making that assessment.

Does electrical activity go into the brain during Neurofeedback?

Absolutely not! This is a common misconception. During the process, the patient’s electrical activity is only read and “fed back” to them visually in the form of video displays. They are simply reinforced visually and auditorily when they produce improved electrical patterns.