Research has shown that ADHD does not affect the intelligence of children and the range of IQ is the same... END_OF_DOCUMENT_TOKEN_TO_BE_REPLACED

It’s no secret that colleges and universities across the country expect a lot of the students admitted into their student... END_OF_DOCUMENT_TOKEN_TO_BE_REPLACED

More and more children are being diagnosed with autism every year. Is autism somehow becoming the next fad diagnosis? What... END_OF_DOCUMENT_TOKEN_TO_BE_REPLACED

One of the more common behavioral problems we see at The Reynolds Clinic is children who have what is called Oppositional Defiant Disorder, or ODD. Oppositional Defiant Disorder is defined as a recurrent pattern of negativistic, defiant, disobedient and hostile behavior toward authority figures—this means you. The kinds of behaviors that characterize this disorder include:

All children have “bad days” but children with ODD have many bad days, so many, in fact, that “behavioral meltdowns” can occur numerous times through the course of a week. Interestingly, they almost only appear at home, not at school. It is not uncommon for a parent with a child with ODD to hear from the teacher that their child is a model student, leaving the parent feeling that they must be doing something terribly wrong or that they are failing as a parent.

More than anything, what children with ODD and their families struggle with is a form of chronic inflexibility. Children with ODD become easily irritated, usually over minor things but before you know it you’re in a major confrontation with your child who is arguing with you, defying you, and perhaps even telling you that they hate you. And no matter how obvious it may be that they are at fault, will refuse to accept responsibility, choosing instead to find anyone or anything else to blame.

Just to make matters worse, no amount of punishment is enough to alter their behavior. In fact, the more you pile on the punishment the more frustrated you become because it doesn’t have the desired effect. Your child appears as though he couldn’t care less. At the clinic it’s not uncommon for us to have parents come in and tell us that they’ve taken away their child’s game boy, their computer, their bicycle, grounded them for weeks on end with no reduction in the undesirable behavior.

Ironically, these children are not always this way. In fact, they can be charming, wonderful, loving children—just not when they are in one of their meltdowns. Even after a meltdown they can show remorse and even promise they won’t do it again. But just as you begin to relax and hope that the recurring family nightmare may be over, it happens again and again and again. And the younger this constellation of behaviors appear, the worse the prognosis. Untreated, children with ODD can destroy families.

Here’s the good news. Like ADHD, ODD is a brain-based condition. Therefore, like ADHD, we have excellent results treating children and families dealing with ODD utilizing a combination of Neurofeedback Training and Parent Coaching.

Interestingly, ODD Children can be quite artistic. Often, however, their art has a decidedly aggressive theme.

Here is an example: 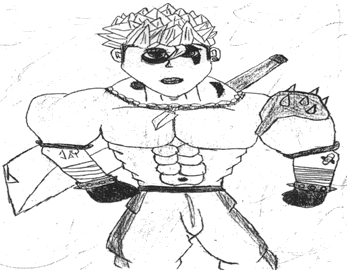